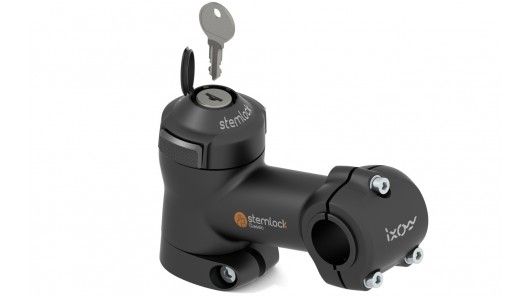 Rahul Kalvapalle — May 13, 2014 — Art & Design
References: ixow & gizmag
Share on Facebook Share on Twitter Share on LinkedIn Share on Pinterest
Stemlock is a unique bicycle theft-prevention contraption that discourages bike thieves by making it impossible for them to steer the bike. The Stemlock's mechanism disconnects the bicycle's handlebar stem from its fork, making it impossible for a thief to steer.

For normal riding, the bike's stem and fork stay securely connected. Upon parking the bike however, users insert a key into the Stemlock and twist it. This causes the bicycle's stem to disconnect from the fork, causing the handlebars to limply swing left and right without having any effect on the front wheel.

Not only does this make the bicycle a less appealing target for bike thieves, it also makes parking and storage a lot easier since the handlebars can be turned without moving the front wheel.

The Stemlock is set to launch at the Eurobike show in August, and will be priced at €74.90 (around $103).
6.6
Score
Popularity
Activity
Freshness
Jeremy Gutsche Keynote Speaker