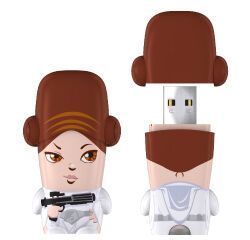 Pop off Princess Leia's signature side buns to reveal the 1GB USB stick which comes loaded with avatars, six full-length movie trailers, wallpapers, icons and a soundByte program. Excited? If you want to nerd it up, you better hurry; there were only 2,500 limited edition Leias made, and they're selling for $54.99.

There's also a 1GB Han Solo, complete with retro '70s, side-parted helmet hair for $54.99. If you prefer Luke Skywalker, there's a 1GB stick of him too. Remove his mimobot helmet-clad head, and you'll reveal the blond hero's dashing good lucks, sans mask and goggles. They also have a 1GB Boba Fett, the galactic bounty hunter to keep all your files safe.

My absolute favourite is the limited edition 2GB Chewbacca for $79.99 which, when you plug him in, makes the obnoxiously adorable wookiee sounds he's loved for!