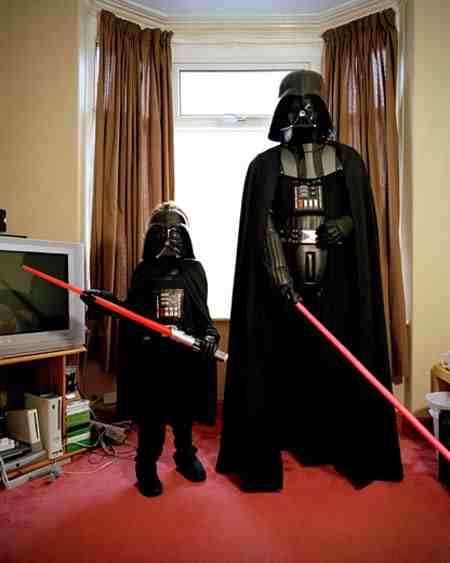 Cowbag — August 25, 2008 — Lifestyle
References: steveschofield & geekologie
Share on Facebook Share on Twitter Share on LinkedIn Share on Pinterest
I love the work of British photographer Steve Scholfield and how he captures his subjects. I am most excited about his latest project which focuses on Star Trek And Star Wars Fans Dressed Up As Characters in their own homes. This series called, ‘Land of the Free,’ is nothing short of brilliant.

Normally, the mere mention of anyone dressed in a Star Wars costume makes me want to flee to a galaxy far, far away. However, there is something in the way these portraits are taken that makes me really warm up to these people. Of course they are all crazy (and check out some of the home decor), but the treatment of the subjects somehow takes them from "Sci-fi losers” to “English eccentrics”. And who doesn't love an English eccentric?

The Daddy and Baby Darth Vader portrait is one of my absolute favourites. The man who matches his curtains to his Star Trek uniform deserves a special mention, as does the woman who has appeared to match hers to the colour of her wallpaper. There are also some politically incorrect dolls, bored looking animals and children who all wander into frame, all adding to the charm. Animals, I hasten to add, that are not as boring as the mother and son portrait. At least I hope it is her son, not her lover, but you can’t jump to assumptions these days.

“My practice is concerned with exploring the fascination that the British public has with American popular culture and the sub-cultural world of fandom,” Steven says of his work. “In the images, I have shown people in their own homes and environments wearing costumes that they would be dressed in to attend events with other like-minded individuals. It seeks to offer a glimpse into seemingly ordinary lives of my subjects and allows the private to become public. The work hints at the depth of people’s fantasies and the methods they employ to adopt this culture as part of their own lifestyle as a means of escapism.”
3.8
Score
Popularity
Activity
Freshness
Get Trend Hunter Dashboard