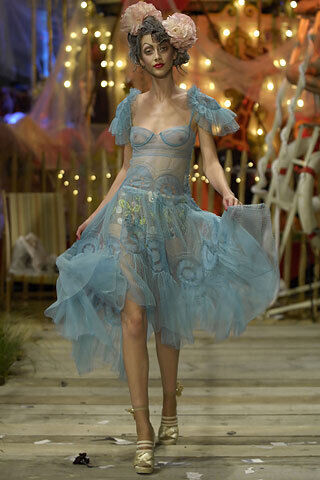 The first half of the ready-to-wear collection was blushing in pastels, and flowing fabrics were abundant. Frills and ruffles adorned the gowns and the models were made up like mannequins, parading down the catwalk with a perceived naive innocence. Bows and florals contrasted the dramatic facial details. The eye brow was defined, slim and very arched, Galliano choosing to rebel against the wild brow favored by other designers at the moment. He did however stick with the paler complexion being seen on other runways, pairing it with a ferocious crimson lip.

Halfway through the show, Galliano teased the audience into thinking they would see a 60s influence as he paraded a few models down the runway with bold eye makeup iconic of the times. It was only a short burst, however, as the look shifted toward a coral palette on form-fitted dresses, finished off with tightly wrapped head accessories.

Then there was another shift, this time hurdling us back to the 40s, the outfits infused with the sultriness of classic of the burlesque era. But Galliano wasn't content there. Next he brought reintroduced us to the flapper girls, in swinging dresses and cropped, curled hairstyles.

Still feeling his restlessness, our eyes were next greeted by the sultry look of Spanish Flamenco dancers, some models even sashaying with long stemmed roses in hand.

It was confirmed when Galliano took the stage at the end of his show that even he was uncertain of what look to wear. The designer was wearing floral leggings, under plaid boxer shorts, knee high socks, a blaze orange vest over bright yellow tee, topped with two floral-patterned hats.

If you like it all, why not wear it all?
3.9
Score
Popularity
Activity
Freshness
Get the 2021 Trend Report FREE

Mid-Range Productivity Smartphones
The Samsung Galaxy A03 Has a 6.5-Inch Infinity V Display