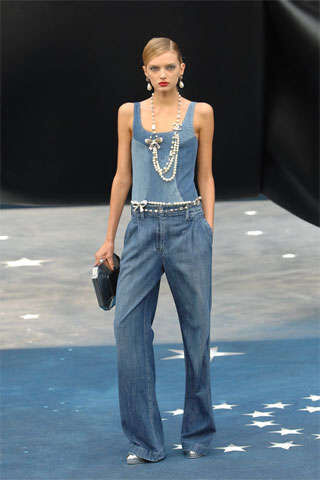 Bianca — October 7, 2007 — Pop Culture
References: style
Share on Facebook Share on Twitter Share on LinkedIn Share on Pinterest
Get ready to don your denim! Looking at his latest collection, you'd think Karl Lagerfeld has been feeling a little blue. Chanel's runway was flooded with denim today in Paris. A key influencer in styles, the trends set by the famed designer are quickly picked up by other designers, copied and soon become viral. A few seconds on the runway of the French capital, and mere hours later, fashion journalists begin their detailed writeups, bloggers hit the keyboards, and designers hit the sewing machines.

Shopping for stylish wardrobes can be pretty hard on the wallet, but that's why we're thankful that Lagerfeld has designed his collection around everyone's wardrobe staple -- blue jeans.

From swim wear to trench coats, many pieces of the collection were blue from head to toe. We saw it all, from denim dress pants to tank tops and even undies. To contrast the cobalts, periwinkles and sky tones, Lagerfeld used metallic accessories, mostly in steel tones. There were fingerless gloves, baubles and jewels, but the real kicker had to be the toeless, lace-up silver space booties!

In keeping with the laid-back connotation of fuss-free jeans, Lagerfeld kept makeup to a minimum on his models, keeping skin pale and eyes natural -- but couldn't resist highlighting their lips with a punch of red. It's Chanel, it's Paris, would you expect anything less?