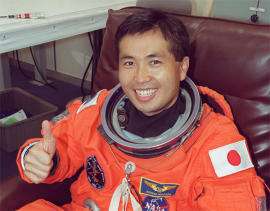 Japan's Astronaut Underwear Fights Odors, Can Be Worn for One Month

Koichi Wakata wore this underwear for an endurance experiment abroad the International Space Station. Made by the top textile company, Toray, the new anti-bacterial underwear, called J-wear, is supposed to keep foul odors at bay--prevent “permanent odour infusion”--as well as repel static and wick away water.

This odor-neutralizing space underwear first arrived on the scene in March 2008 when Japanese astronaut Takao Doi wore it during a two-week flight. Now, with Wakata’s smell test completed, we can rest assured that the underwear will have a fresh-smell life span of at least a month.

Says Wakata, "I wore it for about a month and my station crewmembers never complained for that month, so I think the experiment went fine."
2.6
Score
Popularity
Activity
Freshness
Get Better and Faster

No Wash Underwear
Boxer Shorts Are Yellow in Front, Brown in the Back

Disposable Cotton Underwear
Briefly Biodegradable Undies Can Save the Day