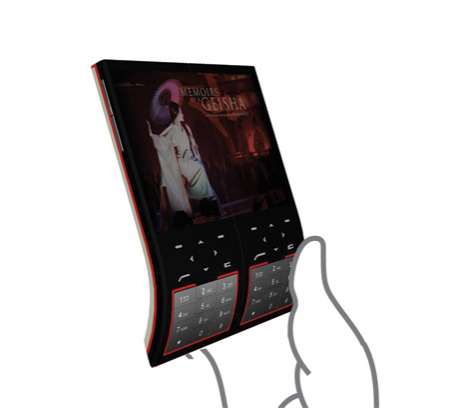 ‘Duophone' Mobiles Prove That Two is Better Than One

Alexandra Choli — February 16, 2009 — Tech
References: yankodesign & mobilenewz
Share on Facebook Share on Twitter Share on LinkedIn Share on Pinterest
A mobile phone’s life is full of communications with acquaintances and friends, whether it’s through calling, sending brief letters or interacting more closely with Bluetooth or IR. The poor things work hard 24/7, yet they do not have the pleasure of that special someone to develop some nourishing intimacy. To make up for the injustice, Duofone introduces a pair of cell phones that are made for each other.

The novel concept boasts two sleek mobile phones dressed in black but subtly marked by the color of passion. Their uniqueness lies in their ability to unite, not under God of course, but under the command of their users. The coupled mobiles combine their screens, thus doubling the size of the display. They can even share battery power when one of them is in need.

The amorous duo reminds us how two are always better and stronger than one, and elegantly reveals the softer side of technology.
3.6
Score
Popularity
Activity
Freshness
Get Better and Faster