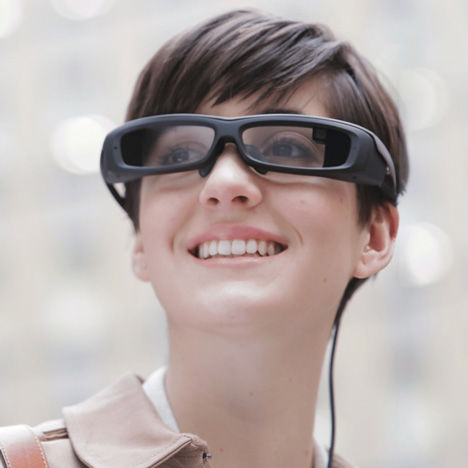 The Sony SmartEyeglass Will Soon Be Available for Developers

Michael Hines — February 22, 2015 — Tech
References: developer.sonymobile & dezeen
The Sony SmartEyeglass is ready to pick up where Google Glass left off. The latest entrant into the smart glass field was shown at CES 2015, and the Japanese tech giant has just opened pre-orders for its developer edition. The Developer Edition SED-E1 will be given a soft launch, with tech professionals in most of Western Europe, the U.S. and Japan able to snag a pair. The glasses aren't exactly sleek, but they do pack a ton of tech.

They feature all the hardware you'd expect, such as an accelerometer, a brightness sensor and a gyroscope. A 3-megapixel camera sits inside the left lens and a microphone lets you issue commands. The Sony SmartEyeglass is noticeably bigger than Google Glass and contains a tethered controller. Abandoning subtly could be good idea as many people were turned off by the prospect of being secretly filmed or photographed by someone wearing Glass.
2.3
Score
Popularity
Activity
Freshness

Intelligent Eyewear
The SmartEyeglass Attach! Can Smarten Up Any Pair of Glasses