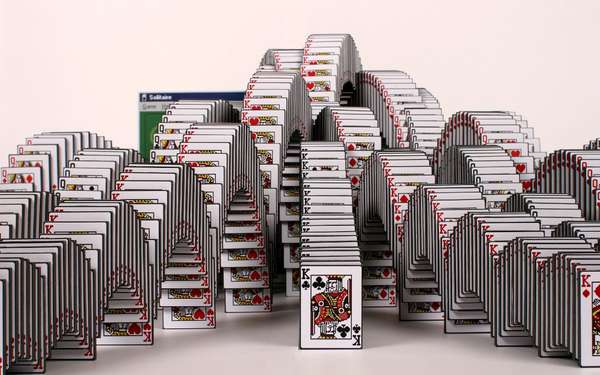 Meghan Young — August 18, 2011 — Tech
References: skrekkogle & neatorama
For those of you who enjoy playing Windows card games, the Solitaire Win sculpture is right up your alley. This 3D rendering of the dancing card graphic that plays on the screen after you have won the game is pretty amazing. In fact, this art piece is so well made that it actually looks like the graphic is jumping right off of the screen.

Created by an art group that goes by the name of Skrekkogle, the Solitaire Win sculpture was made using over a hundred printed cards that were pasted and laminated onto black foam. These thick cards were then arranged into the hopping sequence that appears when the game is won. Of course, Solitaire Win wasn't arranged haphazardly. Instead, Skrekkogle "hierarchized the card's arrays by prioritizing the lowest card values in the intersections."
5.5
Score
Popularity
Activity
Freshness