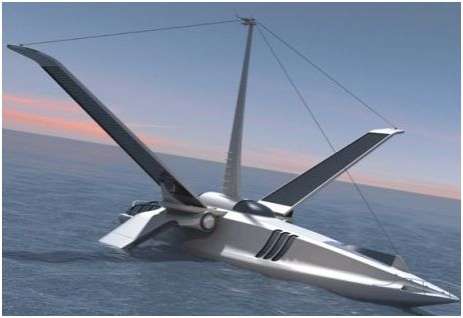 Pearl — July 22, 2008 — Eco
References: popsci
You couldn't get more eco friendly than a sailboat, but there are times when the wind fails and people have to resort to noisy and polluting outboard motors. Now a Turkish design team, GÃ¼rsu and Dogan, has come up with a sleek, solar-powered concept boat that looks more like a plane than a yacht.

It isn't surprising to learn the boat is named after a Mediterranean flying fish. The two wing-like sails are covered with solar panels.

The Volitan measures 105 foot and depends on both wind and sun; wind whenever possible and generated solar energy stored in batteries function as backup. The two electric motors are located in the shorter wings. An onboard computer controls the wings, rotating or tilting them for the best position to catch either wind or sun.

The design won prizes at both the Transportation and Nautical/Boats categories at the 2007 International Design Awards.
5.3
Score
Popularity
Activity
Freshness