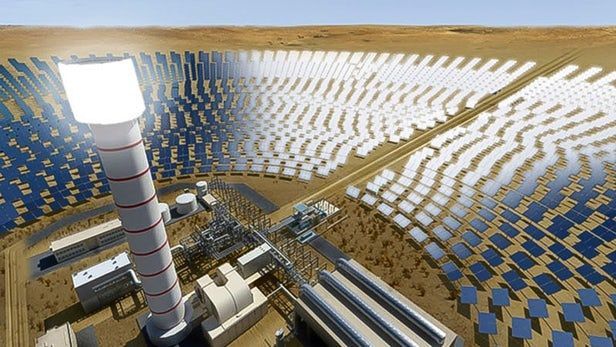 Rahul Kalvapalle — September 20, 2017 — Eco
References: dewa.gov.ae & businesswire
Share on Facebook Share on Twitter Share on LinkedIn Share on Pinterest
The Mohammed bin Rashid Al Maktoum Solar Park in Dubai was already set to be one of the world's biggest single-site solar parks, but it is now absolutely guaranteed to become the absolute biggest, thanks to the impending addition of a 700-megawatt extension to the existing plan, which will give this facility the ability to churn out 5,000 megawatts by the year 2030.

Named after the Prime Minister of the United Arab Emirates, this high-tech solar park is located south of Dubai, and currently boasts as many as 2.3 million photovoltaic solar panels and a capacity of 200 MW, which will multiply more than ten-fold in the next 13 years.

This solar park smartly makes use of the oppressive heat and sunlight of Dubai by using high-tech reflector and lense technologies to use sunlight to heat fluids, in order to generate steam for turbines. By making use of nature's gifts in this way, the Mohammed bin Rashid Al Maktoum Solar Park might just take care of Dubai's growing energy needs for several decades to come, making it a fine example of forward-thinking eco-friendly energy generation.
4.1
Score
Popularity
Activity
Freshness
Get the 2021 Trend Report FREE