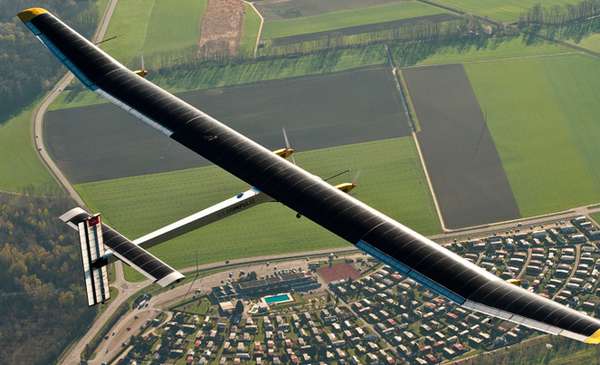 Vivian Lau — August 4, 2012 — Eco
References: solarimpulse & solarimpulse
The Solar Impulse breaks the record for the longest distance ever traveled by a solar-powered aircraft. The last people heard of this eco-friendly plane, it had cruised over Switzerland for a then-impressive 26 hour flight.

As of July 24th, 2012, the plane flew 6,000 kilometres, setting a world record. Solely powered by the sun, the plane harnesses solar energy gathered from where it was stored, so it does not matter what the weather is like during the actual flight. The 1,628 photovoltaic panels line the monstrous 63 meter wingspan, but only weigh as much as the average car. The rate at which this aircraft is breaking records is astounding, as it had only gone on its first intercontinental flight on June 6, 2012, flying from Spain to Morocco.

Since this plane is only a prototype, the next model is scheduled to fly around the world between April and July in 2014. The future of flying is certainly looking up.
1.8
Score
Popularity
Activity
Freshness