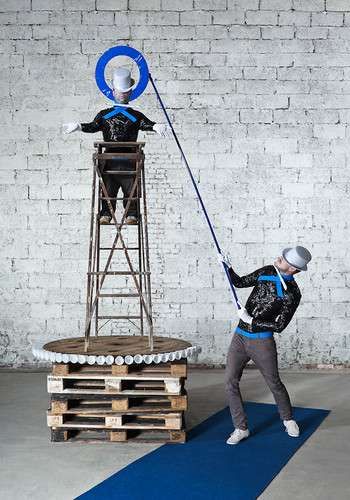 Meghan Young — June 22, 2012 — Fashion
References: nicolasritter & fastcodesign
Share on Facebook Share on Twitter Share on LinkedIn Share on Pinterest
The Social Network by Nicolas Ritter is an avant-garde photo series that hopes to bring new light to activities and online behaviours exhibited in Facebook feeds. Taking mundane scenarios, the German artist stunningly creates artistic interpretations that force people to reflect over their own online realities and how they relate to them.

Dramatizing common actions like 'joining a group' and 'adding a friend' as well as more complex ones including 'only some friends see you' and 'ask a question, add a poll,' The Social Network by Nicolas Ritter puts into perspective how out-of-context they are when put into the real world. Upon closer inspection, little details surface such as the impossibility of making out eyes. Ritter explains, "The protagonists turn into actors and transform to a designed image, just as their profile on Facebook is nothing but a designed image lacking the possibility to look each other in the eye."
2.5
Score
Popularity
Activity
Freshness
Attend Future Festival