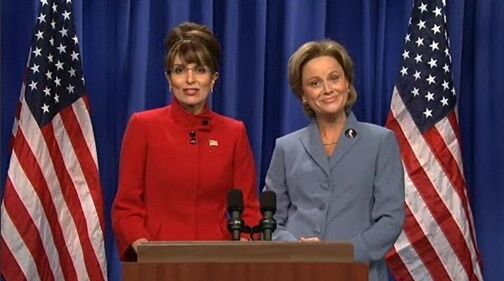 Sandra Winn — September 14, 2008 — Pop Culture
References: nbc
Share on Facebook Share on Twitter Share on LinkedIn Share on Pinterest
The skit on Saturday Night Live featuring Tina Fey as Sarah Palin and Amy Poehler as Hillary Clinton, coming together with a bipartisan message, was no less than hysterical (maybe a biased opinion on my part as I’m a huge Tina Fey and Amy Poehler fan). The comedy duo came together and united against sexism, for instance, Fey as Sarah Palin asks people to “stop photoshopping my head on sexy bikinis... and stop referring to me as a MILF" [mothers I’d like to ****]; while Poehler as Clinton asks people to quit referring to her as “boner shrinker.”

The Tina Fey as Sarah Palin and Amy Poehler as Hillary Clinton sketch has caused quite the buzz with Google search engines and Q & A sites this morning due to an acronym used by Poehler when she said, “and stop referring to me as a ‘FLIRG’.” No one seems to agree on the meaning, but here are a couple of interesting theories: First Lady I’d Like to Gag and First Lady I’d Like to Gut—a bit brutal but certainly fitting as far as the context goes.

Seeing Tina Fey and Amy Poehler together again, and playing two of the most highly publicized female politicians in our time, reminded me of how much I miss them doing the Saturday Night Live Weekend Update—they are both comedic geniuses.

I loved the sketch of Fey portraying Sarah Palin and Poehler portraying Hillary Clinton, almost as much as last years SNL commercial parody of birth control pills that cause menstruation to stop for long periods of time called, “Annuale”, in which Fey and Poehler star with other female cast members—video included, just because it is an SNL classic.
6.1
Score
Popularity
Activity
Freshness
Access Advisory Services