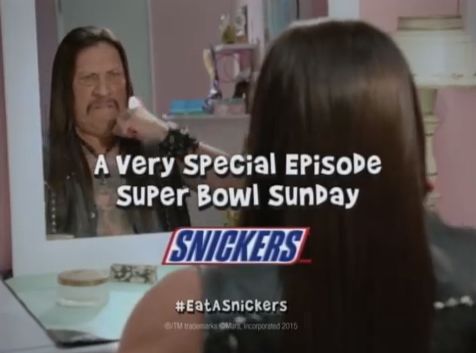 Amelia Roblin — January 27, 2015 — Pop Culture
References: snickers & adweek
With BBDO of New York, Mars is continuing its 'You're Not You When You're Hungry' campaign in this Snickers Super Bowl commercial. With a message that everybody needs a bite of this beloved chocolate bar in order to maintain a normal appearance and demeanor, the candy bar company presents consumers with a surprising sight.

This is a teaser for the short promotional video playing at the 2015 Super Bowl. Setting the scene like an episode of the Brady Bunch, the advertising agency put Danny Trejo in the place of the youthful and beautiful daughter, Marcia. Sitting in front of the mirror is pretty much the opposite sort of person that the viewer would expect to see. The hyper-masculine character brushes his long, dark hair, frustrated that he's not achieving a sweet blonde look -- simply because he hasn't had his Snickers bar.
0.9
Score
Popularity
Activity
Freshness