Lights Made of Sunglasses

Dogs With Cones Lamps
Next
Set of
Related
Ideas 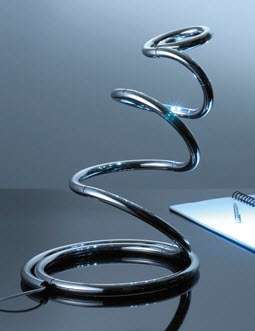 Elsa Blaine — August 25, 2008 — Art & Design
References: pizzakobra.iguzzini & en.red-dot.org
The PizzaKobra lamp, winner of a RedDot Design Award for 2008, had been appropriately delivered to RedDot in a pizza box. Designed by London-based Ron Arad, the high-tech spiral shaped lamp lays ‘dormant’ in a coil until light is required. When you turn it on, the PizzaKobra stretches up from its coil to look astonishingly like a gleaming chrome Cobra. Check out some of those pictures!

The PizzaKobra has high-tech flexible hinges allowing the lamp to be pulled, rotated and theoretically shaped into an infinite number of forms. It can be used on the floor or as a desk lamp.

PizzaKobra’s red stand-by light shines vigilantly as if it is the cobra’s eye, until the touch sensor switch is triggered. The snaky light’s head shines with the cool, white light of six LED lights.
3.1
Score
Popularity
Activity
Freshness

Ever Burning Match
The 'Leave the Light On' Oil Lamp