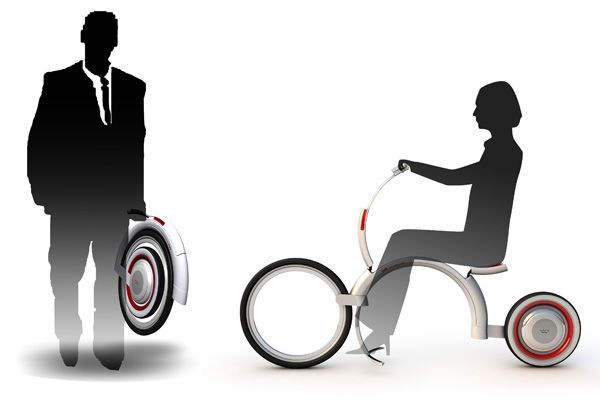 Snail Motorcycle's Round Parts Can Retract for Compact Carrying

Amelia Roblin — May 9, 2014 — Autos
References: yankodesign
Share on Facebook Share on Twitter Share on LinkedIn Share on Pinterest
Some of the most successful designs of objects are the ones inspired by nature, in the way that the Snail Motorcycle has been. Influenced by the coiling shape of the insect's protective shell, this ebike presents an intriguing form and consequently fascinating functionality.

Zhao Yan, Cao Weizhi and Wang Shujing wanted to reinvent the foldable bicycle by giving it a clever shape and integrating an electric motor. With the spiral in mind, the frame was made to a pronounced arc and the large front wheel was designed to nestle into it when shut. The rear wheel -- which houses the assistive mechanics of the bike -- hinges around into the centre of the other two. Finally, the curved handlebars and seat can be collapsed to the circular contour, completing the compact state of the Snail Motorcycle so that it's easy to carry.
4.3
Score
Popularity
Activity
Freshness
Attend Future Festival