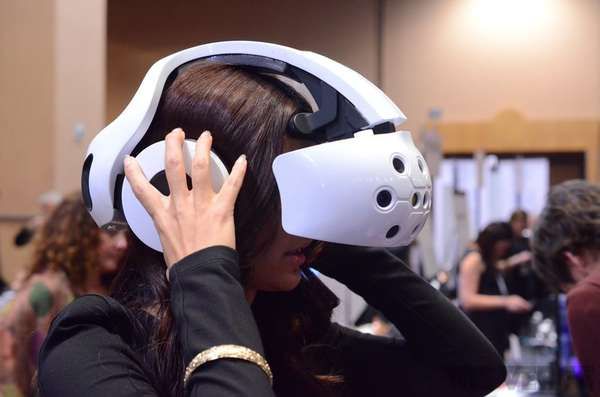 Josh Mears — January 11, 2012 — Tech
References: sensics & theverge
Share on Facebook Share on Twitter Share on LinkedIn Share on Pinterest
Unveiled at CES, the Sensic 'SmartGoggles' are a mind-blowing headset poised to change the world of gaming. SmartGoggles look like something out of a Hollywood Sci-fi flick; essentially allowing users to engage in virtual reality. The goal here is to completely liberate virtual reality goggles from their previous constraints. The Sensic SmartGoggles run on Android Fours operating system.

According to the website, "SmartGoggles are to standard goggles what Smart Phones are to flip phones." The head piece looks, in many ways, like an alien-retina scan or brain-reading device. They have a solid visor that conceals the eyes with its screen and a vertical headband that connects to your ears. Currently, Sensic SmartGoggles are only available in white; however, with this device on your head, aesthetics will be the last thing on your mind -- literally.

The design actually works visually as it enables a nostalgic bond between Sensic and what is no-doubt a facet of many's childhood fantasies. With this new leap in virtual reality, gaming consoles may need to take warning; SmartGoggles seem poised to become a dominating presence upon its arrival. The true aim of this revolutionary headset is to completely negate any controls or plugs.
4.9
Score
Popularity
Activity
Freshness
Get Trend Hunter Dashboard