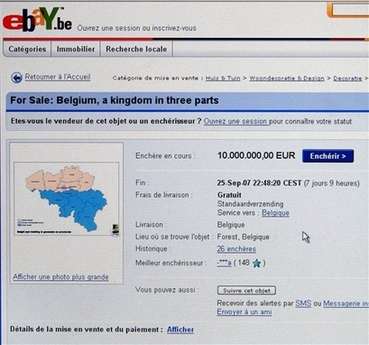 Ben Preiss — September 20, 2007 — World
References: spiegel.de & news.yahoo
Share on Facebook Share on Twitter Share on LinkedIn Share on Pinterest
Did you get a chance to bid on Belgium on eBay? We're not talking about buying Second Life imitations (see below), we're talking about the real country. To protest the political deadlock in Belgium, Gerrit Six, a teacher and former journalist, attracted attention to a country that gets very little press by putting it up for sale on eBay. eBay went along with the prank ad for a while, but pulled it after bids reached 10 million Euros ($14 million).

eBay Belgium's PR manager, Peper Burin, said, "It was a really fun listing made by a Belgian. This person, in a very funny way, reminded the Belgians what a great country Belgium actually is and it would be a shame to sell it."