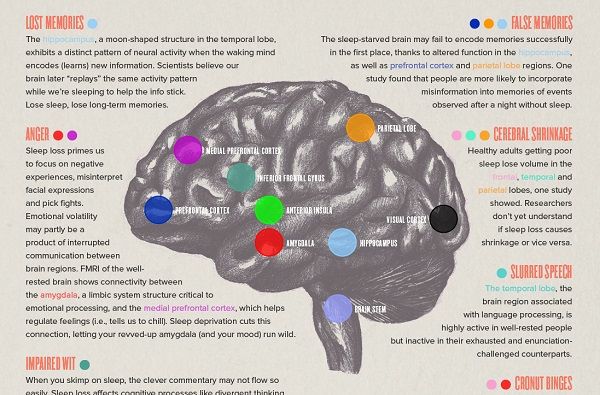 This Infographic Lists Sleep Deprivation Effects and Impact on the Brain

Alyson Wyers — June 4, 2015 — Lifestyle
References: mic & designtaxi
Share on Facebook Share on Twitter Share on LinkedIn Share on Pinterest
This scientific infographic shows sleep deprivation effects and the way the brain (and therefore, the rest of your body) is influenced. From General Electric and Mic, 'What Happens When Your Brain Doesn't Sleep?' demonstrates how being starved for sleep and being very drunk are similar in terms of symptoms.

The sobering chart shows how different parts of the brain are affected when you are extremely tired and the behavior that can result in. Possible sleep deprivation effects include lost or false memories, anger, slurred speech, impaired wit, hallucinations, risky decision making and spaciness (otherwise described as having your head in the clouds). The infographic also lists brain damage and cerebral shrinkage, not to mention increased likelihood of cronut binges.
3
Score
Popularity
Activity
Freshness
Get Trend Hunter Dashboard