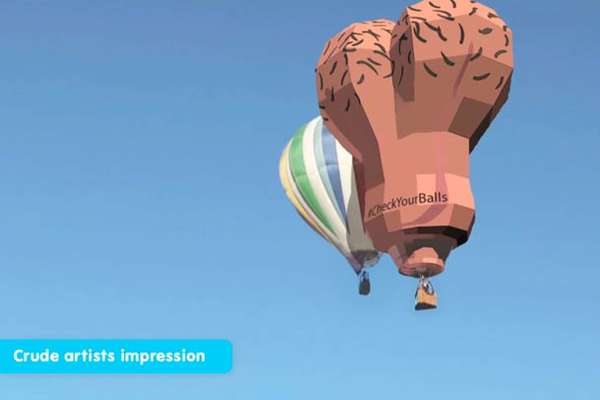 Meghan Young — August 2, 2013 — Naughty
References: indiegogo & psfk
Share on Facebook Share on Twitter Share on LinkedIn Share on Pinterest
No, that is not a typo, Skyballs isn't referring to the latest James Bond theme song 'Skyfall,' but perhaps it is a clever pun. In reality, Skyballs is the name of a hot air balloon shaped like the male scrotum. Not as classy as the crooning of Ms. Adele, but Skyballs will certainly get people talking just as much. But hopefully it will get people talking about the right thing. The Skyballs were conceived to bring more awareness to male cancer.

Created by U.K.’s Male Cancer Awareness Campaign (MCAC), Skyballs is being deemed the 'ultimate awareness tool' as stated on Indiegogo. MCAC hopes to raise enough funds, with the help of Irish actor Chris O'Dowd, to make Skyballs a reality. Its goal is a whopping £100,000.
1.7
Score
Popularity
Activity
Freshness
Get Trend Hunter Dashboard