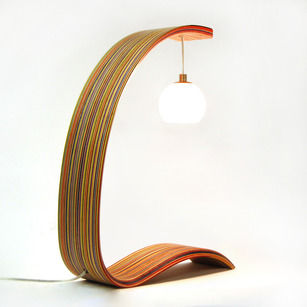 The Skatelamp by MapleXO is an Urban Upcycled Design

Meghan Young — November 26, 2013 — Eco
References: maplexo & coolhunting
Share on Facebook Share on Twitter Share on LinkedIn Share on Pinterest
The Skatelamp by MapleXO, a studio founded by Lindsay Jo Holmes and based in Portland, Oregon, looks like a skateboard that sat up one day to realize that he (or she) didn't want to be a skateboard anymore; so then and there it turned into a light fixture. The curves present in its design really does give it an animated personality. And, as its name gives away, the Skatelamp by MapleXO is made out of the materials of an old skateboard.

Created in collaboration with Paul Sykes of Sykes Wood Fenders, a local artisan and woodworker, the Skatelamp by MapleXO was made out of decks sourced from dumpsters behind a skateboard factory in Tijuana, Mexico. Holmes says, "We put in some major blood, sweat, and tears to make this lamp happen, but at the end of the day, we owe the credit back to skateboarding for the way it has opened our eyes to potential in what others consider garbage."
5.7
Score
Popularity
Activity
Freshness
View Innovation Webinars

Skateboard Book Rests
These Book Ends are Stable and Skater-Savvy