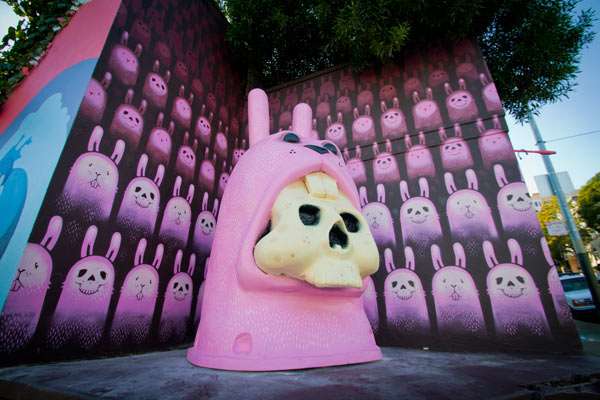 Matt Ho — January 20, 2011 — Art & Design
References: sillypinkbunnies & juxtapoz
For those who admire the bizarre, Jeremy Fish’s 'Silly Pink Bunnies' is a giant pink rabbit statue with its head skin stretched so far up that it reveals the bunny's skull. Fish could have stopped there, but he's also added a nice mural behind the statue featuring the furry creature as well. It isn’t exactly a cute bunny for kids due to its grotesque nature, but it’s still a welcoming sight for those who appreciate street art.

'Silly Pink Bunnies' was a recent addition to the Lower Haight mural, which has had numerous contributions from graffiti artists such as Mars-1. The statue can be seen in Lower Haight, San Francisco.
3.4
Score
Popularity
Activity
Freshness