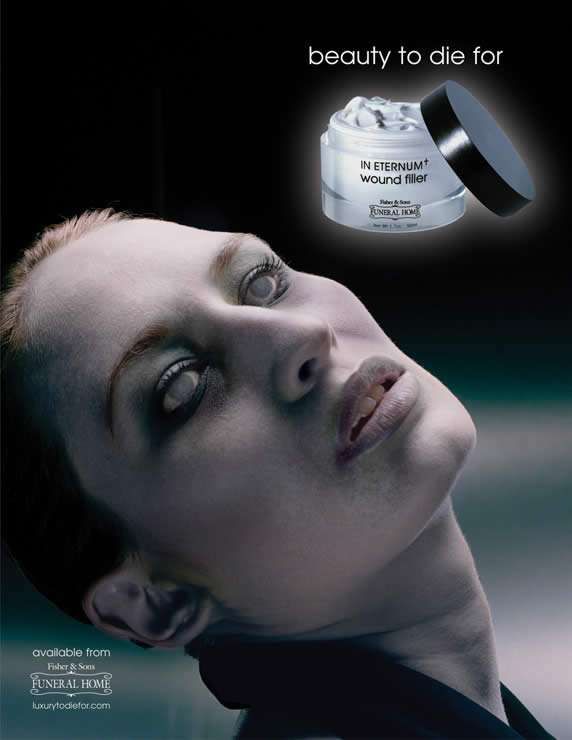 There are ads here for the following products: the Energizer Battery company in Chile, “Killer Heels” by NMA, the ‘Six Feet Under’ TV Series in the UK, Towers Anti-Smoking Campaign in China, the Breast Cancer Fund in the USA, and a barcode on ex-British PM Tony Blair by NO2ID in the UK.

The print ads were suppressed by government authorities or rejected by the clients themselves not because there is nudity and lewdness displayed, as is often the case, but because, for the most part, these ads are simply too morbid and gruesome.

For example, consider the ads for the Energizer Battery and the TV series ‘Six Feet Under,’ which are first and second in the gallery. I think most people will be simply horrified to look at these images of dead people because death is perhaps the biggest and most powerful taboo in Western society.

There is also the violent killer heel on the lead picture which glamorizes violence and death. The No More Smoking Sign is fine by me, but the authorities in China thought it was inappropriate.

The Tony Blair barcode ad was banned because, “...the barcode on Tony Blair’s upper lip made him resemble Hitler, which was offensive.”

Finally, the cancer ad was rejected by Viacom “over fears that its depiction of mastectomy scars would prove to be too shocking to the public.” Well, that’s the point. I wonder if Viacom would have reacted differently had the ad not featured a Victoria Secret-like model.
6.3
Score
Popularity
Activity
Freshness
Get Trend Hunter Dashboard