Social Networking For The Mentally Ill 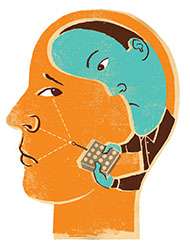 One of the latest solutions has been for the so-called “mentally ill”, who would once have been hospitalized or medicated, to connect through various sites, such as GangStalkingWorld.com, with others suffering from the same “delusions."

Commonly known as mind-control sites, the dark side of social networking allows social outcasts and misfits to find comfort by sharing their disturbing experiences with others. (Alien abduction and phone tapping are common shared fears.)

"The views of these belief systems are like a shark that has to be constantly fed,” Dr. Ralph Hoffman, Yale Professor said, “If you don’t feed the delusion, sooner or later it will die out or diminish on its own accord. The key thing is that it needs to be repetitively reinforced.”

While it is considered to be a trend that is helpful in many ways, the proliferation of personal injury or self-induced harm sites, such as anorexia, bulimia and the most disturbing of all, suicide, lead many observers to feel that the Internet isn’t a cause of mental illness, but it certainly does bring a complicated variable.
0.9
Score
Popularity
Activity
Freshness
Attend Future Festival