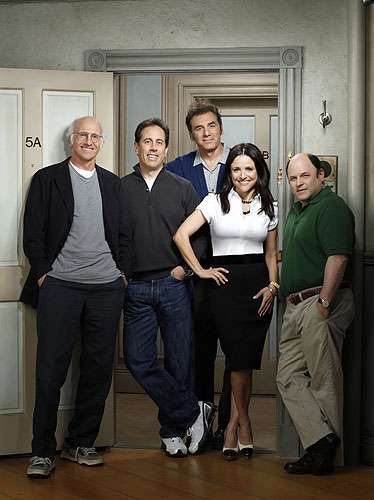 Marissa Liu — September 18, 2009 — Pop Culture
References: hbo & youtube
Share on Facebook Share on Twitter Share on LinkedIn Share on Pinterest
No need to curb your enthusiasm—the ‘Seinfeld’ reunion is happening but only on Larry David’s HBO show. Jerry Seinfeld, Julia Louis-Dreyfus, Michael Richards, and Jason Alexander will guest star on Larry David’s ‘Curb Your Enthusiasm’ for a ‘Seinfeld’ reunion with a twist. Fans should be excited to finally see Larry David act alongside the familiar cast on the famous show he helped create.

The original ‘Seinfeld’ sets are back and so are most of the familiar faces (Newman). Both Jerry Seinfeld and Larry David had been quite forthcoming about their reluctance to do a ‘Seinfeld’ reunion but the opportunity to explore the classic show in a different way and to expose and create new dynamics between the cast and crew, something that could only be done on a show like ‘Curb,’ proved irresistible. Now, the only question that remains is this: Will audiences be able to handle a ‘Seinfeld’ reunion with two versions of George Louis Costanza?
2.7
Score
Popularity
Activity
Freshness
Get the 2021 Trend Report FREE