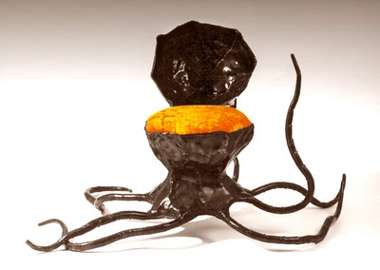 Katie Cordrey — January 26, 2009 — Eco
References: oneyal.mosaicglobe
Share on Facebook Share on Twitter Share on LinkedIn Share on Pinterest
The quirky art of Eyal On is part genius, part steampunk and all functional art. The forms would be at home on Jules Verne’s Nautilus, in a ‘Mad Max’ film, revving up a Klingon Warbird, hiding out in an antique mansion, or adorning the open spaces of a modern home.

Eyal lives in Pardes Hana, Israel. He moved from L.A., where he learned to surf. He likes being near the sea so he can put his surfing skills to use. He lived most of his life in Jerusalem, but it was Tel-Aviv where he began making furniture fifteen years ago. He collected discarded scraps from a factory next door because he thought they must be good for something other than the garbage heap.

As a third-generation metal worker, Eyal had the skills to work the recycled material. His sense of style made itself known as he put the pieces together. His work has been shown in 3 Tel-Aviv galleries and 1 gallery in Rush Pina. Each piece is a signed one-of-a-kind bit of art. He has no plans to do production copies, and hopes that others will enjoy his furniture enough to allow him to achieve his dream of making a living by making art.
3.6
Score
Popularity
Activity
Freshness
Jeremy Gutsche Keynote Speaker