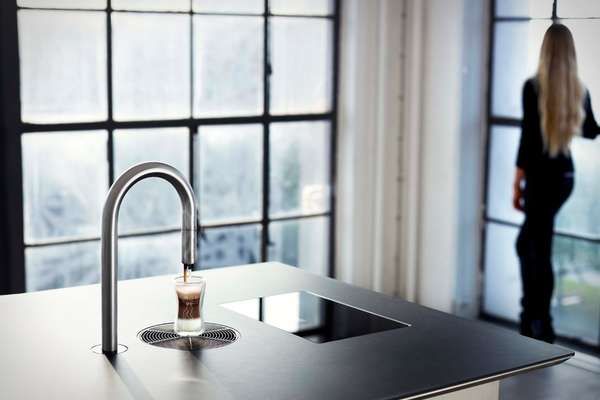 Matt Ho — December 4, 2011 — Lifestyle
References: scanomat & uncrate
Share on Facebook Share on Twitter Share on LinkedIn Share on Pinterest
While the Scanomat Top Brewer may look like a modern sink tap, water doesn't come out of it. Believe it or not, the Scanomat Top Brewer is actually a coffee maker despite its slick, deceptive design. The machine itself is stored inside a lower drawer unit, which then dispenses the fluids out of the tap. Since it’s stored in the bottom area, the Top Brewer brings a quieter alternative to coffee machines.

The tip of the tap has three nozzles: one for milk, another for coffee and the last as a steamer. The Top Brewer also has an automatic cleaning system, an automatic milk system and it can be controlled via iPhone and iPad.

When it comes to coffee machines, it doesn’t get any more modern than the Top Brewer.
6.4
Score
Popularity
Activity
Freshness
Jeremy Gutsche Keynote Speaker