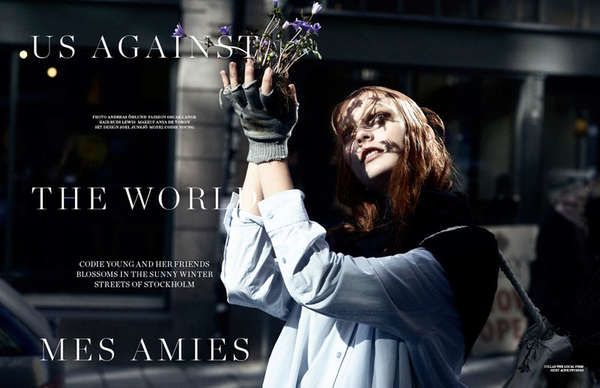 Meghan Young — May 28, 2013 — Fashion
References: scandinaviassaw & fashiongonerogue
Share on Facebook Share on Twitter Share on LinkedIn Share on Pinterest
Model Codie Young appears to channel Audrey Hepburn's Eliza Doolittle character from the film 'My Fair Lady' in the Scandinavia S/S/A/W 2013 editorial. But it doesn't reference Hepburn's transformation. Instead, it embraces her struggling flower entrepreneurship and life on the streets. It is even fittingly titled, 'Us Against the World Mes Amies.'

The Scandinavia S/S/A/W 2013 editorial was captured on the streets of Stockholm by photographer Andreas Öhlund. The Australian beauty embraces her dejected character with somber looks, which were accentuated with messy hair and bruised eyes by Rudi Lewis and Anya de Tobon respectively. She was also outfitted in a layered wardrobe by stylist Oscar Lange, who concentrated on sneakers, gloves, oversized jackets and hats.