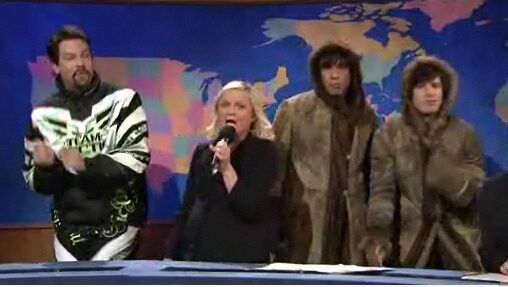 Sandra Winn — October 19, 2008 — Pop Culture
References: weblogs.baltimoresun & nbc
Share on Facebook Share on Twitter Share on LinkedIn Share on Pinterest
Although Sarah Palin’s appearance on Saturday Night Live was not all it was cracked up to be--blame the SNL writers if you will--Amy Poehler’s Sarah Palin rap was a big hit and saved the night. Governor Sarah Palin merely sat in her chair and put her hands in the air, which was cute and showed Palin to be a good sport, but it was Amy Poehler and four cast members who stole the show.

Sarah Palin bowed out of performing the Sarah Palin rap herself on Saturday Night Live because she felt the lyrics were “too hardcore” and could negatively impact the McCain/Palin campaign. Despite Poehler doing the rap instead of Tina Fey, it was a great and memorable SNL performance.

Here are the viral and hysterical lyrics to Amy Poehler’s Sarah Palin rap on Saturday Night Live that many people will be searching for—in case one is too busy laughing to catch them all in the video.

My name is Sarah Palin you all know me,

Vice president nominee of the GOP

Gonna need your vote in the next election

Can I get a “what what” from the senior section

Cause that smile be creepy

But when I be vp

All the leaders in the world gonna finally meet me

Tell me what you know Eskimo

How you feel Eskimo

Tell me tell me what you feel Eskimo

But when I see oil, let’s drill baby drill

My country tis of thee

From my porch I can see

All the mavericks in the house put your hands up

All the mavericks in the house put your hands up

All the plumbers in the house pull your pants up

All the plumbers in the house pull your pants up

When I say ‘Obama’ you say ‘Ayers’

I built me a bridge - it ain’t goin’ nowhere.

McCain, Palin, gonna put the nail in the coffin

Of the media elite

Cause I’m an animal, and I’m bigger than you

Holdin a shotgun walk in the pub

Everybody party, we’re goin on a hunt