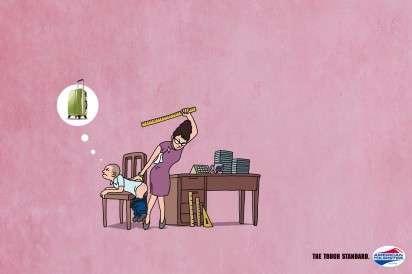 Meghan Young — November 10, 2011 — Marketing
References: jwt & ibelieveinadv
The Samsonite American Tourister ad campaign is quite interesting. At first it might be a bit confusing considering the negative images in each print ad, but as one notices the resolute expressions on each 'victim's' face and pair them with the tag line, "The tough standard," it becomes glaringly apparent that these luggage pieces will inspire thick skin, strong will and determination.

Conceived and executed by Hong Kong-based ad agency JWT, the Samsonite American Tourister ad campaign really shakes things up with these prints. It turns dubious scenes into something rather heroic and then transfers that sentiment onto the luggage itself. It relies on people's association and interaction with each image. More than that, the Samsonite American Tourister ad campaign draws viewers in with the intriguing scenes in the first place.
1.7
Score
Popularity
Activity
Freshness