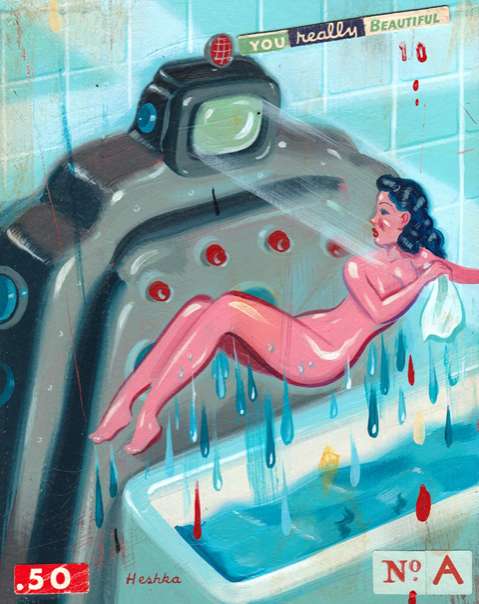 Susan Keefe — November 3, 2011 — Art & Design
References: ryanheshka & sweet-station
Share on Facebook Share on Twitter Share on LinkedIn Share on Pinterest
The Vancouver-based artist Ryan Heshka has made a name for himself with his deliciously retro, surrealist designs. Before becoming an illustrator, Ryan Heshka flirted with careers in interior design and animation. Since his career shift, Heshka has enjoyed success both at home and abroad, cultivating a fairly loyal following in Asia.

Drawing on influences of stylized pin up girls of the fifties, as well as the strangely sexual advertisements of the same era, Heshka renders his characters with an overt, yet restrained sexuality. His subject matter seems to have its origins in sci-fi drive-in cinema classics, and of man's supposed colonization of the moon that was rampant throughout the fifties and sixties. Ryan Heshka wields a vivacious palette equipped with the punchy and pulpy colors often found in vintage comics. His pieces appear oddly familiar, yet unsettling unique.