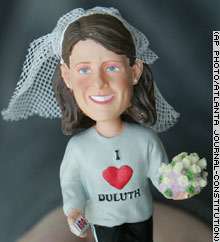 Nigel Goodwin — March 7, 2006 — Unique
References: cnn
Runaway Bride bobblehead dolls disappeared from Duluth, Georgia just as fast as the real thing. The dolls seem to have been inspired by a real runaway bride from the same town who made headlines last year.

Each doll features a woman's face with a wedding veil, a bouquet of flowers, a sweat suit and a pair of running shoes labeled as "Adios" instead of Adidas.

The dolls were given to the first 1,000 people through the gates at the Gwinnett Gladiators ice hockey game last Sunday. People lined up more than three hours before the game to get the dolls, 20 of which have seen been offered for sale on eBay.

27 Bizarre and Beautiful Innovations for Brides