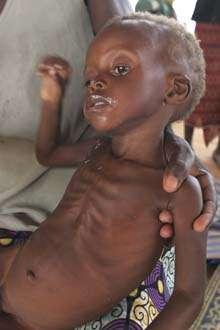 The extremely high rates of world hunger are shocking, and disturbing to those people who have never experienced it, mostly because we feel there is nothing we can do. Many people contribute to charities, donate to food drives, or support foreign aid workers, but no significant breakthroughs have been made yet.

The key concern is that while the children may receive food, the items they're consuming still don't supply adequate nutrition that will help them gain weight, regain strength and fend off illness.

That's why RUF could be the answer. It's "a blend of such ingredients as milk powder, peanut butter, vegetable oil, sugar, vitamins and minerals in individual packets designed to provide all the nutrients a young child needs," CBC reported.

The packages have a long shelf-life and aren't affected by weather conditions like extreme heat. They're ready to use and don't require preparation. A child doesn't have to rely on an adult to benefit from the packages, they don't need to go into any areas of potential danger to gather firewood or water.

"The doctors group, which won the 1999 Nobel Peace Prize, is launching a campaign under the slogan Food is Not Enough, asking donors, researchers, governments and international organizations to help provide the cash and know-how required to get RUF to those who need it."

They believe that they could save five million children under the age of five. That's truly incredible. The only obstacle is the price, and getting approval from the U.S. government. While not outrageously expensive, the RUF still costs more than the other goods, like corn and wheat, that are currently being sent. In addition, "they face obstacles in Washington from policies intended to ensure that U.S. aid dollars buys U.S. farm products."

What's key to remember is that it's the quality of food, not quantity, that can ensure these children get healthy, and that's the message Doctors Without Borders are trying to get across. If RUF gets approval and funds start going toward that production, the future could hold a lot of hope.

It seems, however, that for now, these doctors do have borders after all.
6.5
Score
Popularity
Activity
Freshness
Attend Future Festival Virtual

100 Inspiring Innovations To Excite You About Life