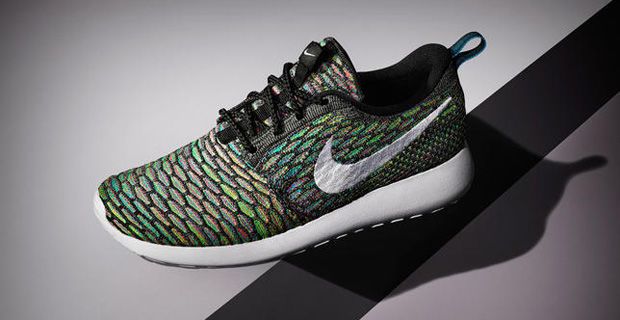 Meghan Young — February 17, 2015 — Fashion
References: store.nike & lifelounge.au
Share on Facebook Share on Twitter Share on LinkedIn Share on Pinterest
The Nike Roshe Flyknit continues to be simple and sleek in a new colorway. With an iridescent aesthetic, this particular shoe looks as though it were made with Daenerys Targaryen, the Queen of Dragons, in mind. After all, the design of the Nike Roshe Flyknit could be likened to the look of a dragon's egg.

That said, the only hatching this Nike Roshe Flyknit will be doing is one that will inspire a stylishly active lifestyle. Lightweight and comfortable, the design might radiate simplicity, but the colorway is far from that. The contrast between that and the overall design of the shoe provides a great balance between the two that many will appreciate. Complete with a white swoosh, women will be able to greet spring properly in a pair of Nike Roshe Flyknit.
6.6
Score
Popularity
Activity
Freshness
Attend Future Festival