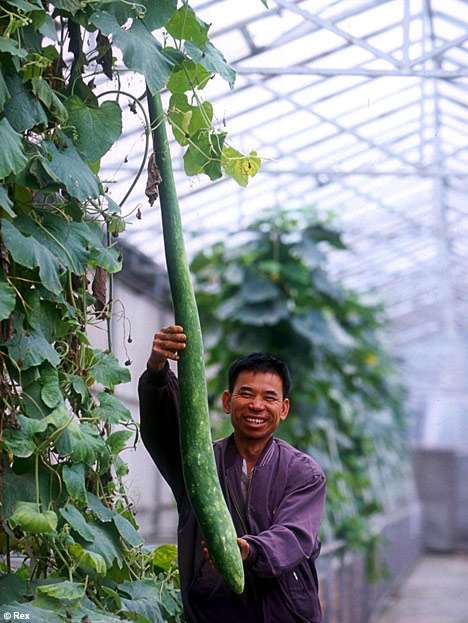 Dee Sandin — May 14, 2008 — Lifestyle
References: gdaas.cn & dailymail
I wonder if these things have Air Miles? Mega Veggies are grown from seeds that were fired into space, where for two weeks, they orbited the Earth. Once returned, the seeds are cultivated in hothouses and the final product is the HUGE specimens seen in these photos.

Mega Veggies are a product of the Chinese who believe they could be a possible solution to the global food crisis. The Guandong Academy of Agricultural Sciences has grown 21 lb tomatoes, chilli peppers nine-inch long, 210 lb pumpkins and enormous watermelons. These Mega Veggies can feed many more people than their smaller cousins can and contain more nutrients. It is believed that near zero gravity conditions - microgravity - creates high-yield rice, wheat plants, tomatoes and peppers with harvests estimated to be 10 to 20 per cent greater than normal.

â€œSpace seeds offer the opportunity to grow fruit and vegetables bigger and faster.â€ Researcher Lo Zhigang said: â€œConventional agricultural development has taken us as far as we can go and demand for food from a growing population is endless. Theories, as to why time in orbit causes seeds to mutate, vary from cosmic radiation to microgravity. â€œWe don't think there's any threat to human health because the genes themselves do not mutate, just their sequence changes,â€ he said. â€œWith genetically-modified crops you have seen environmental problems because they have added genes that can damage other organisms. â€œBut with space seeds they don't gain genes, they can only lose them.â€

Claims that Vitamin C content in some vegetables is nearly three times higher while levels of zinc are also boosted. What will they think of next?

I love the comment from Dave, Workhop - â€œCan't wait until they start sending certain body parts into space?â€ Boys will be boys.
3.6
Score
Popularity
Activity
Freshness