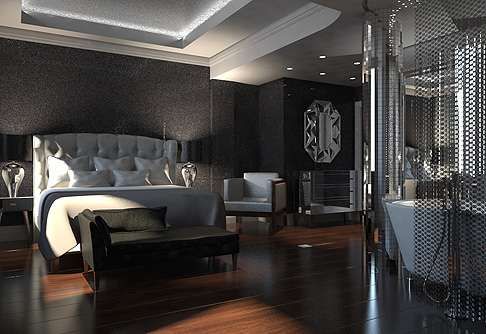 The Sanctum Soho Boutique Hotel is Strictly for Rockers

Out: throwing TVs from the window.
In: serious relaxation, decent beauty sleep and 24 hour food and drink and an offering all geared to the needs of touring artistes.

A bouncer is on the staff, apparently, to keep the paparazzi and autograph hunters firmly at bay.

The hotel has been created in a partnership between the management of Iron Maiden, the heavy metal band, and Mark Fuller, a nightclub owner. The hotel is billed as a retreat for musicians playing in London, including Iron Maiden themselves.

"The hotel will be rock ‘n’ roll at its best," Taylor said. "The desk clerk will definitely be dressed in black just as in Elvis’s ‘Heartbreak Hotel.’ It will be a fairly elite environment. The bar will be open for 24 hours to cater for bands who come off stage at venues such as the O2 at 11 p.m. or midnight."

The £6.5m project, called Sanctum Soho and rumored to open in either February or April 2009, has 30 boutique rooms. A stay will cost from £150 for a “crash room” to £260 for rooms which have names such as Purple Haze and Naked Baroque to £500 for suites called Naked Luxe.
3.8
Score
Popularity
Activity
Freshness
Get Better and Faster

25 'The Office' Finds
From Goofy Celebrity Portraits to Superhero Impersonations