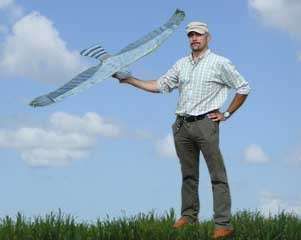 Ayman — March 6, 2008 — Eco
References: birdstrikestop & engadget
Share on Facebook Share on Twitter Share on LinkedIn Share on Pinterest
After Bianca's adorable glittery iBird, Trend Hunter needed to bring masculinity back to robotic birds, so we bring you a mean robotic Flaco. The â€œFALCO ROBOT GBRSâ€ (aka, Gregarious Bird Removal System) is a meanie to other birdies, because aims to scare the hell out of them. Flocks of birds pose a serious problem at airports, and Falco is the answer. The ecological design requires power for only about a minute after takeoff, then "flies like a goshawk, exploiting thermal updrafts."

The system is the result of ten years of experimentation and ornithological studies by Bird Raptor. It is a flying aircraft, radio controlled by an operator, that perfectly imitates in the aerial movements (circling, attack, overflight etc.) a big raptor, arousing immediately in the gregarious birds a reaction of hasty escape. Falco is a life-size mechanical replica of a female goshawk with a 5.25-foot wingspan. In a test at the Genoa airport, a remote-controlled Falco reportedly dispersed 1,000 seagulls.


See the iBird, who could work as a sidekick, luring victims before Falco goes for the kill!

69 Birdie Innovations
Our Flying Friends, From Robo-Birds to Avian Couture