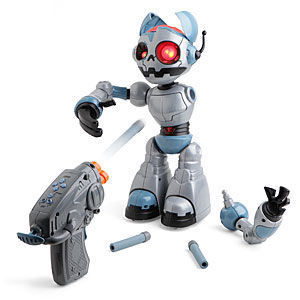 Have Fun Saving the World with Robot Zombies

Mesel Isaac — December 24, 2013 — Life-Stages
References: thinkgeek
If it wasn't bad enough that we had to worry about zombie apocalypses and robots becoming sentient and taking over the world, now we have to worry about robot zombies possibly being the harbingers of our doom.

This remote controlled robot zombie toy is an oddly cute creation for something that's meant to destroy all of humanity. While this "zombiebot" may be programmed to destroy us, we do have a means of fighting back. Included with the robot zombie comes a dart launcher that allows you to take aim and try to shoot off this abominations arms and cranium plate so you can get to its light-up brain; you'll know when you've killed it when the Robot Zombie's head burts off.

Made out of plastic, the Robot Zombie measure 13" tall and 7" wide, the toy requires 4 x AA batteries and the blaster will require 2 x AAA batteries and comes with three darts, so be sure to make every shot count.