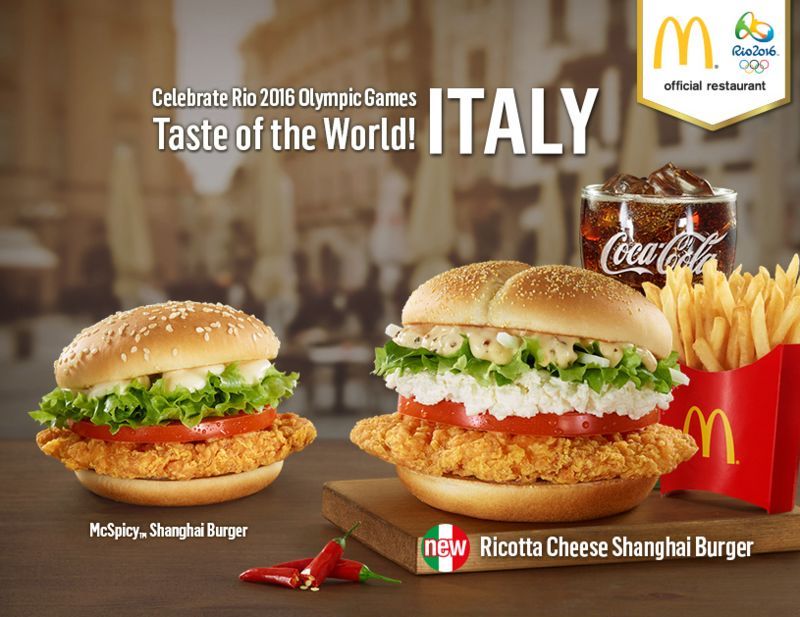 Katherine Pendrill — March 7, 2016 — Lifestyle
References: mcdonalds.co.kr & brandeating
Share on Facebook Share on Twitter Share on LinkedIn Share on Pinterest
In honor of the 2016 Olympics, McDonald's South Korea has introduced an unusual new dish called the 'Ricotta Cheese Shanghai Burger.' While the Olympics may be taking place in Rio, South Korean consumers can celebrate by indulging in the taste of Italian cuisine.

The new Ricotta Cheese Shanghai Burger is a decadent chicken burger inspired by traditional Italian cuisine. The burger consists of a crispy Shanghai chicken filet topped with tomato, lettuce, onion and a heaping portion of ricotta cheese. Despite the Italian influence, the name of the burger comes from the original McSpicy Shanghai Burger, which is made with the same spicy chicken filet.

While the burger itself is not inspired by Rio, the dish expands on the brand's 'Great Tastes of the World' campaign, which celebrates different countries coming together for the 2016 Olympics.
1.7
Score
Popularity
Activity
Freshness
Get Better and Faster