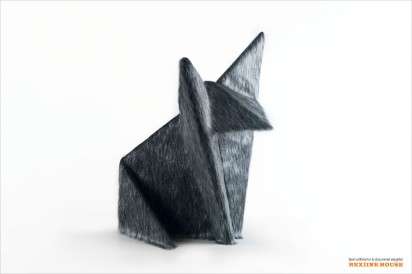 The Rexiine House campaign was conceived and executed by JWT, an ad agency based in Chennai, India. Art directed by Sreekumar Lakshman with creative direction by Senthil Kumar and Priya S, the ad campaign features minimalist imagery, which was shot by photographer Alekh Ajayaghosh. This simplicity allows people to concentrate on the materials used to craft each origami figure. For the fox, fox fur is used while cow hide is folded for the cow.