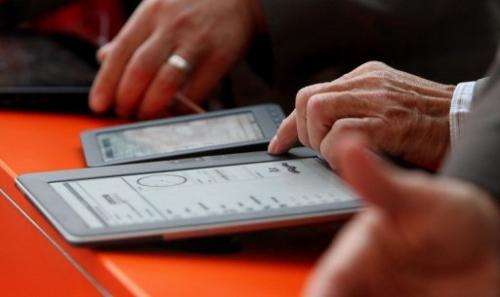 Omar Yusuf — August 9, 2011 — Eco
References: physorg & gizmodo
Share on Facebook Share on Twitter Share on LinkedIn Share on Pinterest
Having kept their invention under lock and key for months, a group of Taiwanese researchers quietly unveiled a new form of rewritable e-paper called the i2R e-paper. The paper doesn’t consume electricity, is flexible and can be disposed in an eco-friendly way.

Although current iterations of the i2R e-paper can only be reused 260 times, it’s certainly a start. Without a backlight and no AC power, the rewritable e-paper stores specially formatted images in the device by heat. To erase the page, simply slide it through a ‘thermal writing device.’ Developed at the Industrial Technology Research Institute in Tokyo, the project has since been delegated to a Taiwanese firm who hopes to push the project into the market in the near future.

Not only could rewritable, digital paper replace the analog pulp people ordinarily use, it could altogether marginalize blackboards, bulletins and potentially even projectors!
1.9
Score
Popularity
Activity
Freshness
Get the 2021 Trend Report FREE