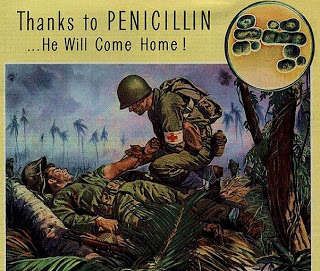 Andrew Sztein — January 25, 2013 — Lifestyle
References: pnas.org & io9
Share on Facebook Share on Twitter Share on LinkedIn Share on Pinterest
Despite being one of the most important medical discoveries of the 20th century, many strains of bacteria have become resistant to penicillin. The drug, produced from a fungus known as Penicillium chrysogenum, is slowly going obsolete because of evolution in disease-causing bacteria. This is a big problem, because the fungus produces asexually, which means that there's not enough genetic diversity in the chemical makeup of the fungus. This means that there are only so many configurations of penicillin, and as far as bacteria are concerned, the jig is up.

However, hope is on the horizon in the battle against diseases resistant to penicillin. Scientists have induced sexual, rather than asexual reproduction in a strain of the fungus, greatly enhancing its genetic diversity and keeping bacteria on their toes. That is, if bacteria had toes...

The researchers are also touting economic as well as the medical benefits of their find.
0.7
Score
Popularity
Activity
Freshness
View Innovation Webinars

Delicatessen Donuts
The Fractured Prune is the Luxury Handbag of Pastries