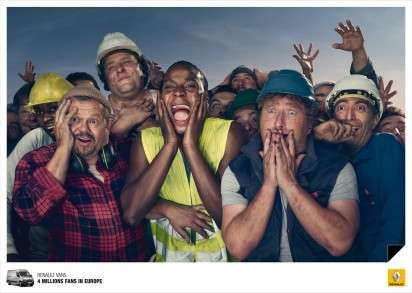 Meghan Young — November 6, 2011 — Autos
References: publicisgroupe & ibelieveinadv
Share on Facebook Share on Twitter Share on LinkedIn Share on Pinterest
By the looks of the faces featured in the Renault Vans ad campaign, a person would think that Justin Bieber just made an unexpected visit. Yet, these aren’t typical tweens who would lose their minds over an Internet icon. Instead, the featured subjects are hardened construction workers and chefs who have just encountered the Renault Vans.

Conceived and executed by Paris-based ad agency Publicis Conseil, the Renault Vans ad campaign focuses on the fervor often portrayed when people meet their all-time idol, but instead transfers that feeling to the Renault Vans. By doing so, Publicis Conseil articulates just how highly-anticipated this particular vehicle is, while instilling excitement in those who were not necessarily looking forward to its release.
1.4
Score
Popularity
Activity
Freshness
Access Advisory Services