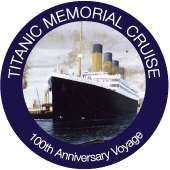 Ice Your Spot on the Titanic Cruise Redux for April 2012

Going Like Sixty — April 22, 2009 — Marketing
References: titanicmemorialcruise
Share on Facebook Share on Twitter Share on LinkedIn Share on Pinterest
Would you like to recreate the voyage of the Titanic? April 2012 marks the 100th Anniversary of the fateful voyage of the Titanic and Fred Olsen Cruise lines are offering the chance to follow the epic cruise on their ship, the Balmoral. The trip will be full of nostalgia and will carry 1,309 passengers, the same number that sailed on the maiden voyage along the same course.

The Titanic cruise will leave from Southampton, then dock at the Irish port of Cobh, the last place the real Titanic docked at on April 11, 1912. On the anniversary day, there will be a memorial service at the very spot the Titanic sank 100 years ago.

“The whole voyage will be steeped in Titanic history," Titanic Memorial Cruise says. "The food served will match the sumptuous menus on the original voyage; the entertainment will include music and dancing in the style featured in those glorious times and there will be a chance to hear first hand from historians who have studied the Titanic story.”
1.1
Score
Popularity
Activity
Freshness
Access Advisory Services