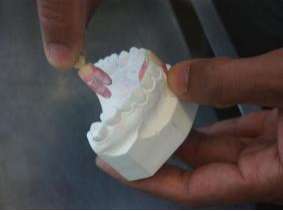 Eva Rubenov — August 9, 2006 — Science
References: gizmag
Thanks to a Canadian invention, you will soon be able to regrow your own teeth.

"A team of researchers from the Canadian University of Alberta researchers has created technology to regrow teeth - the first time scientists have been able to reform human dental tissue. Using low-intensity pulsed ultrasound (LIPUS), scientists have created a miniaturized system-on-a-chip that offers a non-invasive and novel way to stimulate jaw growth and dental tissue healing. The researchers are currently working on turning their prototype into a market-ready model and expect the device to be ready for the public within next two years." - Giz Magazine

"It's very exciting because we have shown the results and actually have something you can touch and feel that will impact the health of people in Canada and throughout the world," said Dr. Jie Chen, at the Department of Electrical and Computer Engineering and the National Institute for Nanotechnology.
5.4
Score
Popularity
Activity
Freshness