Foods That Save Environment 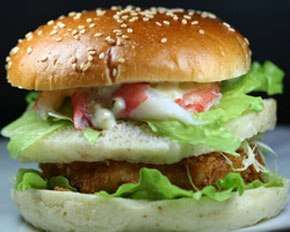 Ayman — March 22, 2008 — Eco
References: kilian-nakamura
Share on Facebook Share on Twitter Share on LinkedIn Share on Pinterest
The idea of eating local specialties is deeply rooted in the culture of Asian countries such as Japan. Fusing iconic western food such as burgers with local items sometimes leads to some unusual combinations and non-traditional hamburgers, such as the crab burger (top, left) from Hokkaido and the egg and onion burger (top, right) from the Hyogo region.

Now there is a new environmental twist added to the formula: achieve ecological balance by taking the invading creatures that are causing damage and trouble for the native species and their local habitat (such as the North American Blue Gill and Black Bass that are responsible for the diminishing population of local fish in Lake Biwa) and using them in burgers or other popular food items.

It's a yummy and delicious way of bringing the issue of species population control to the table (and eating it).
2.2
Score
Popularity
Activity
Freshness
Access Advisory Services