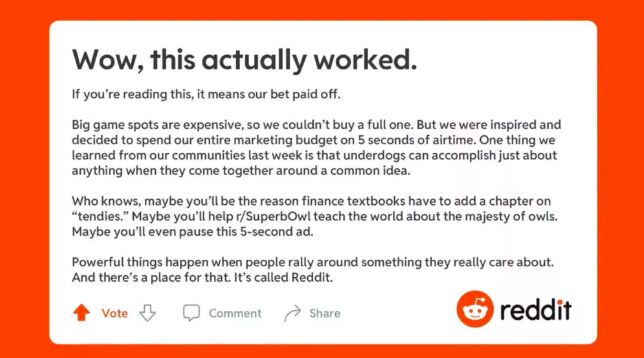 Ellen Smith — February 9, 2021 — Marketing
References: adweek
Share on Facebook Share on Twitter Share on LinkedIn Share on Pinterest
Reddit's five-second super bowl ad was short but impactful, featuring only one screenshot with 11 sentences. The Super Bowl presents a unique opportunity for brands to showcase their best creative talent, but the price of doing so is incredibly high. While money is not an issue for some of the major companies, others, like Reddit, claim they can't afford to run a traditional 30 second to one-minute ad.

Instead, the online forum spent its entire marketing budget on this five-second spot, which viewers would have to pause to read in its entirety. The clever ad referenced the website's viral GameStop moment, and played into the idea of being an underdog, taking big risks and online community.