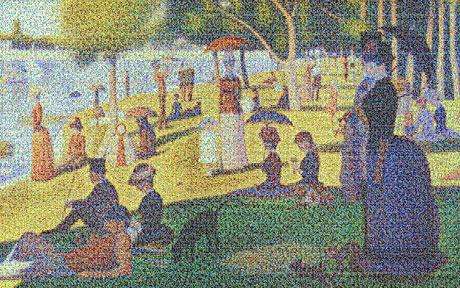 This unique version of Georges Seurat's 1884 pointillist masterpiece, A Sunday Afternoon on the Island of La Grande Jatte, was assembled from thousands of smaller photographs, depicting 106,000 tin cans, the number of drinking cans used in the US every thirty seconds.

The piece is part of series by Jordan titled Running The Numbers, which aims to shed light on "the vast and bizarre measures" of American society through visualised statistics.

Other pieces in the collection include a forest of one hundred million toothpicks, representing the number of trees cut down in the US each year to make the paper needed for junk mail.

Another piece shows a sea of 426,000 mobile phones which represents the number of mobile phones thrown away in the US each day.
2
Score
Popularity
Activity
Freshness
Get Better and Faster

Exclusive All-White Sneakers
Roger Federer and On Release a 1,000 Pairs of the Roger