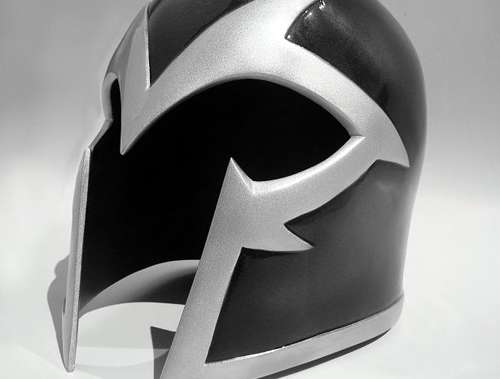 Jason Soy — February 6, 2012 — Art & Design
References: raultumba.deviantart & rampagedreality
Magneto was one of the most badass characters in X-Men: First Class, which is probably why Raul Tumba was inspired to replicate his memorable helmet. Made entirely out of fiberglass, the menacing head protection is sculpted and painted to look identical to the film prop. Some of Tumba’s photos even feature Michael Fassbender adorning the helmet for comparison.

Raul Tumba’s creation is so awesome, he’s even made an accompanying video just to better show off how cool it actually is. And if you’re staring at the thing and thinking to yourself, “I just got to have one of those,” you’re in luck, as Tumba’s currently auctioning it off on eBay.